Conflicting Memories is a study of how the Tibetan encounter with the Chinese state during the Maoist era has been recalled and reimagined by Chinese and Tibetan authors and artists since the late 1970s. Written by a team of historians, anthropologists, and scholars of religion, literature and culture, it examines official histories, biographies, memoirs, and films as well as oral testimonies, fiction, and writings by Buddhist adepts. The book includes translated extracts from key interviews, speeches, literature, and filmscripts. Conflicting Memories explores what these revised versions of the past chose as their focus, which types of people produced them, and what aims they pursued in the production of new, post-Mao descriptions of Tibet under Chinese socialism.
Contributors include: Robert Barnett, Benno Weiner, Françoise Robin, Bianca Horlemann, Alice Travers, Alex Raymond, Chung Tsering, Dáša Pejchar Mortensen, Charlene Makley, Xénia de Heering, Nicole Willock, M. Maria Turek, Geoffrey Barstow, Gedun Rabsal, Heather Stoddard, Organ Nyima. (source : Brill)

Robert Barnett directed the Modern Tibetan Studies program at Columbia University 2000–17. Currently a Professorial Research Associate at SOAS, University of London, he is the author/editor of such studies on modern Tibetan history as Lhasa: Streets with Memories (Columbia, 2010) and Forbidden Memory (Nebraska, forthcoming 2020).
Benno Weiner received his Ph.D. from Columbia University in 2012 and is Associate Professor in the Department of History at Carnegie Mellon University. He is author of The Chinese Revolution on the Tibetan Frontier (Cornell University Press, 2020).
Françoise Robin is a professor of Tibetan language and literature at Inalco in Paris. She has done extensive research on Tibetan contemporary literature and filmmaking and has translated many novels and short stories from Tibetan into French and English.

A syncretistic and millenarian religious movement, the Yiguandao (Way of Pervading Unity) was one of the major redemptive societies of Republican China. It developed extremely rapidly in the 1930s and the 1940s, attracting millions of members. Severely repressed after the establishment of the People’s Republic of China, it managed to endure and redeploy elsewhere, especially in Taiwan. Today, it has become one of the largest and most influential religious movements in Asia and at the same time one of the least known and understood. From its powerful base in Taiwan, it has expanded worldwide, including in mainland China where it remains officially forbidden. Based on ethnographic work carried out over nearly a decade, Reclaiming the Wilderness offers an in-depth study of a Yiguandao community in Hong Kong that serves as a node of circulation between Taiwan, Macao, China and elsewhere. Sébastien Billioud explores the factors contributing to the expansionary dynamics of the group: the way adepts live and confirm their faith; the importance of charismatic leadership; the role of Confucianism, which makes it possible to defuse tensions with Chinese authorities and sometimes even to cooperate with them; and, finally, the well-structured expansionary strategies of the Yiguandao and its quasi-diplomatic efforts to navigate the troubled waters of cross-straits politics. (source : Oxford University Press)

END_OF_DOCUMENT_TOKEN_TO_BE_REPLACED 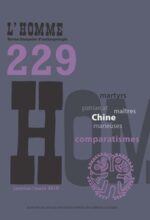