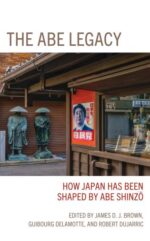 The book offers a study of a fascinating political personality, that of Japanese prime minister Abe Shinzō (2012-2020). Abe’s political career was boosted by his predecessor Koizumi Jun.ichirō and he seemed extremely promising at 51 when he rose to become the youngest Cabinet Secretariat chief, however once in power in 2007 he disappointed by resigning after only one year. Yet, he rose again in 2012 to become the longest-serving prime minister of Japan’s history since the end of the Meiji Era (1868-1912), when Japan went through a radical process of modernization and westernization, becoming a major military and imperialist power in the process.

The book seeks to answer three questions. How could Abe Shinzō remain in power for nearly a decade in a country where prime ministers usually have much shorter terms, in some cases of only one year? He remained in power in spite of the fact that he sought to conduct massive reforms. What was the policy mix devised to keep voters happy, while promoting structural reforms and growth? He was in power for almost ten years. What is his legacy: what remains of his tenure as chief executive?