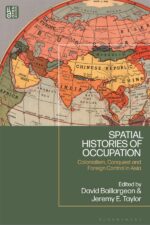 “The Second Sino-Japanese War (1937–45) had a tremendous impact on the spatial configuration of state power in China, whether by forcing the transfer by China’s Nationalist government of its capital from Nanjing to Chongqing or in the creation by Japan of a new state apparatus in occupied areas of China. In the meantime, China’s landscape underwent profound changes, from the massive Yellow River flood of 1938 to the transformation of the border regions as a result of the moving of the government administration westwards, followed by the movement of millions of refugees. In the same way, the size and configuration of China’s territory had a significant influence on how the Japanese ‘occupation state’ took shape, and this process affected, in turn, the way in which China’s political landscape was perceived. The occupation forces were gradually organized according to different areas, with each of them sponsoring local pro-Japanese governments. This political configuration of the occupation state was then justified by China’s spatial configuration through a rhetoric that rationalized China’s political disunity as a consequence of its geography.[2]

In keeping with the themes of this volume, this chapter seeks to explore how the Japanese occupation of China resulted in not just actual changes to the landscape of China itself, but also to new ways of administering, imagining and mapping occupied China. Drawing on both Japanese and Chinese archival sources from the occupation period, as well as the literature on ‘mapping’ in wartime Asia, I will show how the Japanese occupation did not lead to a monolithic view of what a wartime and postwar China would look like spatially, but to competing ‘maps’ of 120China that reflected different visions. The chapter makes the case that our understanding of the occupation state can benefit if we take into account the spatiality of state power and the ways in which conflicting political strategies translated into different topographies of the state apparatus. After a preliminary discussion of the occupation state, this chapter focuses on three stages in the remapping of China under Japanese occupation. The first part presents a late 1938 Japanese memorandum promoting the ‘Confederate States of China’, which includes an allegorical sketch of China as a potato plant. The second section addresses the spatial aspect of ‘huandu’ (‘return to/of the capital’) – this being one of the main slogans of the collaborationist regime led by Wang Jingwei. It shows that the location of the capital was not only an issue regarding the fierce competition between Beijing and Nanjing, but also between major cities in each province to become the seat of respective provincial governments under occupation. The third part examines the circumstances in which the collaborationist reorganized national government (RNG) decided to create a brand new province in China – Huaihai Province – as part of a larger plan aimed at redrawing China’s administrative map in order to reduce the size of China’s provinces […] (source : Bloomsbury collections)