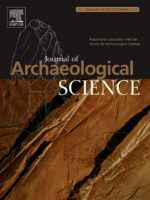 The assessment of the date of death (DOD) of animals found in archaeological sites provides insights into the exploitation of their environment by ancient mobile and sedentary populations. In an attempt to overcome the limitations of the traditional methods, we determine the DOD of domestic caprines using sequential oxygen isotope analysis of developing tooth enamel. We built a reference set composed of developing molars from 14 modern sheep and goats from Western and Central Mongolia with known DOD. The teeth were sequentially sampled, and δ18O sequences were modelled using a cosine function in order to position the lowermost δ18O value (δf) within the annual cycle. We found that δf values are strongly linearly correlated with the DOD (R2 = 0.88), allowing the use of this regression to estimate the DOD with a precision of about ±25 d (1σ). This method was applied to determine the DOD of caprines found in two graves in the Xiongnu necropolis of Egiin Gol, Mongolia. We determined a slaughter date of late July and late September for the two graves, respectively, suggesting that burial occurred during the warm season. By combining this information with age at death assessed using tooth eruption stages and tooth wear patterns, we were also able to determine that caprine birth occurred mostly in April and was strongly controlled within this seasonal window by the herders, much like in Mongolia today. (source)